Freezer Burn: The Invasion Of Laxdale 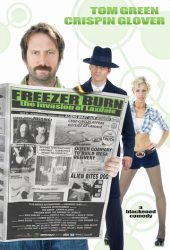 Athabasca University students can view the film by clicking this link.

This 2008 science fiction comedy from writer-producer Josh Miller uses well-worn generic conventions in order to touch lightly on questions about what makes Canada tick. We all know the plot: washed up hero is re-animated by a personal goal (his coach and his dog have been killed) and saves the world from an alien invader, thereby redeeming himself and getting “the girl” in the end.

Yes, we have seen this before, but it is the treatment that makes this film such enjoyable light entertainment. Using Hockey as a metaphor for the spiritual health of Laxdale, a small prairie town, Producer Josh Miller, Director Grant Harvey, and their co-writers, Blaine Hart and Barry Kloeble, introduce us to Bill Swanson (Tom Green), a washed up NHL hockey goon whose career was over before it began, after he took a “puck to the head.” Bill has returned home to a town that has lost its soul, having willingly leapt at the chance to sell its land to a supposed multi-national “Dutch” company offering to build a refinery and provide everyone with secure jobs. Bill’s former hockey coach, Arnie Filmore (Scot Hylands) is the only person in Laxdale who still likes and respects Bill, but Arnie has had a Roswell moment and has seen the “Dutch” businessmen for what they really are: aliens. He has discovered their purpose (to turn the Earth into an inter-galactic Club Med where earthlings will work as servants); he has also realized that the secret to destroying the invaders is to expose them to anything that is frozen. The movie has the usual supporting cast: the puck bunny, Gina Larson (Sarain Boylan); the evil alien frontman for the invasion, Vergacht (Crispin Glover); and two especially gormless “hosers,” Randy and Dwayne (Paul Spence and David Lawrence).

Like other recent films aimed at a commercial audience dominated by youth, Freezer Burn has benefitted from Telefilm Canada funding: $1.5M of the movie’s $5.5M budget. Miller, who has served as President of the Alberta Motion Picture Industries Association, on the Board of the Alberta Foundation for the Arts, and is a former Chair of the Edmonton International Film Festival Society, believes that government support is essential for the health of independent film production in Canada. Telefilm’s modest goal of raising the percentage of screen time in Canada for English-language Canadian films from 1% to 5% is partly what drives its decisions to fund films like Freezer Burn.

Javascript is required to view this map.

Want to see how Canadian film has grown? Create a timeline

Would you like to learn more about Canadian Film? Athabasca University has a number of courses on media studies and film. Become a student today!

Canadian Film Online is an interactive website devoted to the history of full-length feature filmmaking in Canada. This project was built by Athabasca University and is funded in part by the Canada Interactive Fund Program of Canadian Heritage.